There is a major problem coming!

I don’t want to sound melodramatic here but it is a really big deal. The politicians in Washington are not going to help us out of this mess in fact they are trying to make it worse.

It is a very subtle undercurrent today but it will build into a tsunami if we aren’t careful and prepare over the next couple of decades. If you are in the working world you know what I am talking about and it is probably something you worry about a few times a day in your subconscious mind. So what is it?!

We have a retirement crisis in America. Even though scholars seem to think otherwise and researchers have found that if you ask retired folks 74% of them say that they are living comfortably in retirement.

Of course that would be the case if you ask currently retired individuals. Most of them have multiple forms of guaranteed income streams from Social Security and corporate or public pensions. On top of being significant participants in two fairly amazing bull markets in stocks (1983-1999 and 2011-current).

Let’s look at the pension problem first. It is disappearing and has been for the better part of the last twenty years.

Pensions were what allowed many people in older generations to retire comfortably but for late Baby Boomers, Gen X, Millenials and Gen Z a guaranteed income from your company will be nearly impossible to find in retirement. The days of working for a company for 35 years and retiring with a lifetime income of $30,000 a year or more plus your social security are dead.

So what has replaced it?

Most of my readers have a 401(k) or 403(b) and while they have been around since the late 1970’s they have only really begun to gain in popularity in the last 15-20 years coincidentally that coincides with the demise of the traditional pension plan.

Let’s dig a little deeper to find out who is participating and what companies are matching. 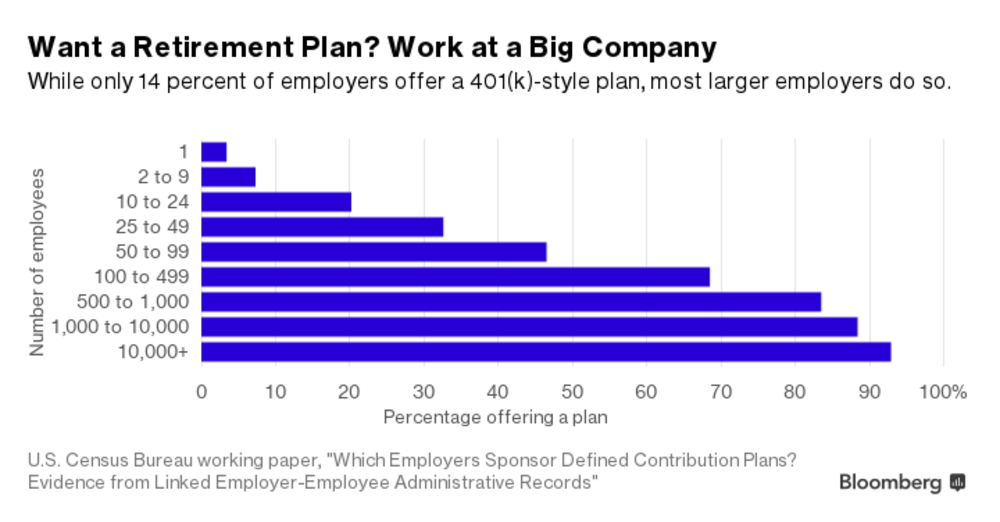 Some analysis done by census researchers showed that only 14% of all companies in the United States offered some sort of retirement vehicle or defined contribution savings account.

Now I know that number is a little skewed because there are a lot of solo businesses and under 25 employee companies in the country but a number that low is inexcusable. Now that doesn’t mean that only 14% of of employees have access to 401k’s or other defined contribution plans. That number is actually about 74% according to recent BLS Data. That still means that 26% of employees do not have access to a 401K plan or other company sponsored retirement plan. It also doesn’t mean that all of the 74% of people are participating in the 401K plan just that they are being offered.

We are seeing a slowing in mean retirement savings in 401(k)s. I believe that this may be driven by two things. The first is the beginning of the first retirees with a 401(k) have begun to take their retirement incomes from their accounts by either rolling their balance to an IRA or by beginning to take their RMDs from the 401(k). The second reason is the fact that people were shell shocked after the Great Recession and turned off or reduced their contributions to their 401(k) plans. We also saw people reduce their exposure to equities 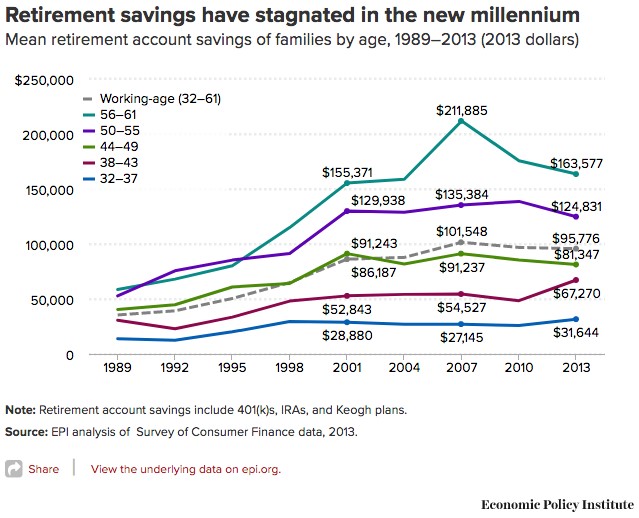 Also important to note that on top of the mean balances in retirement accounts going down the median amount of retirement savings is putridly low. 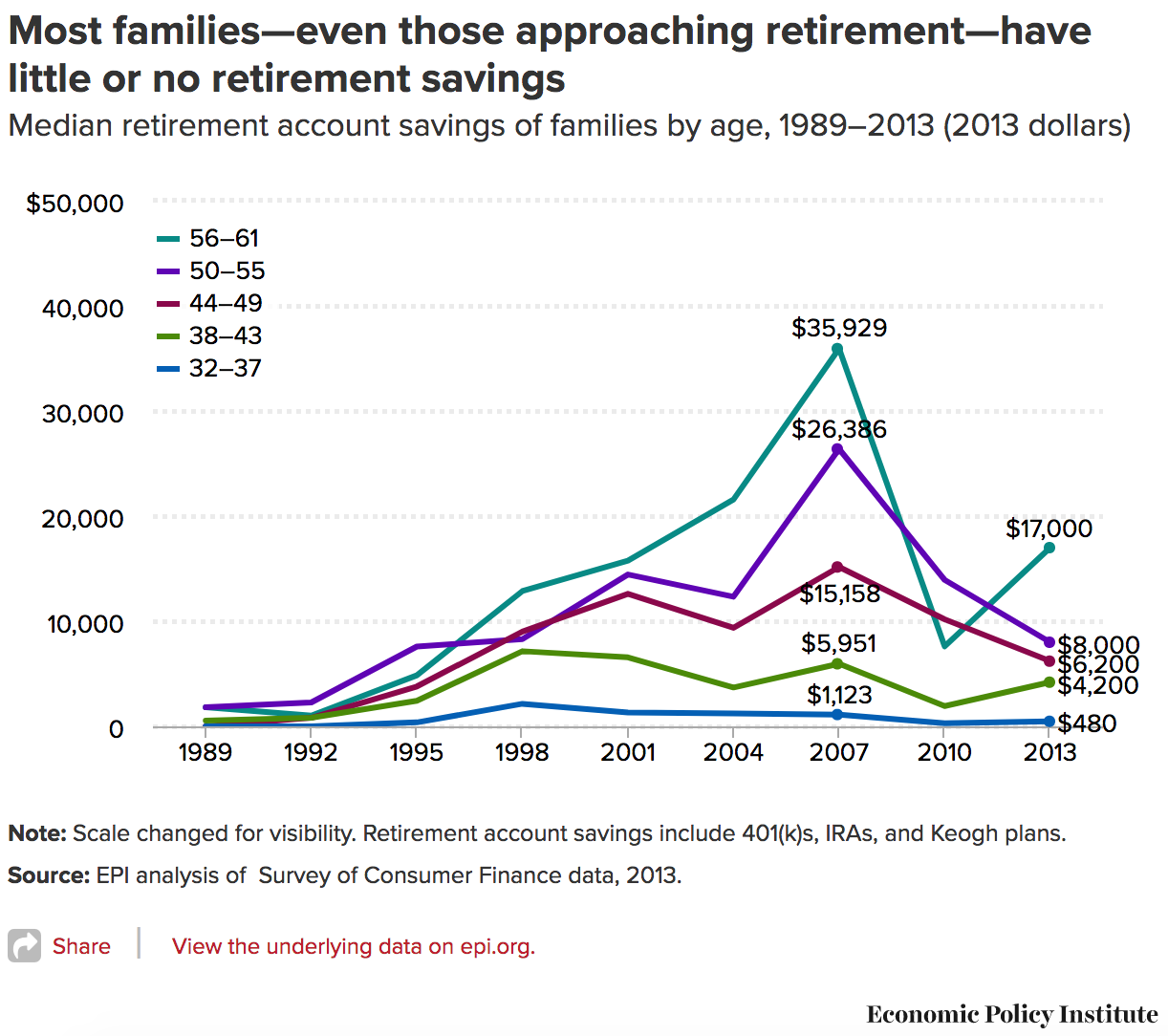 So how do we fix it?

There is no easy fix. The first thing I see is that more and more people view themselves as probably never retiring in the traditional sense of the word. Most of my 40 something year old friends say they plan on working in some sort of job well into their 70s or 80s. Personally I think the traditional idea of retiring to the beach at 60, 62, or 65 is dead. It is being replaced with people working much later in life either in second careers or side jobs to help bridge the income gaps that used to be filled by lifetime pensions.

Now I know that idea may seem crazy but the biggest problem I see inside the 401k plans that I oversee is the lack of participation from employees making less than 50k a year. In conjunction with this government match I would make regular financial education for employees part of the deal. I am always amazed when I have employee meetings for plan sponsors how poorly educated people are about the second most important part of their life after their health. We have to begin financial education in the school system in a major way. That will help these kids avoid falling into the traps that are everywhere when it comes to money. Then if we continue it with mandatory finance education for all college students and employees we may be able to stave off the coming crisis.

Retirement requires a lot of planning and time. The problem that currently exists took years to create and it will take years to fix and will require everyone to participate including employees, companies, and the government. I understand the importance of collecting current tax revenue but it should not be at the expense of retirement savings otherwise we will end up with an old work force that has to work since their retirement dream died with the crisis that is currently brewing.