The death of repeal and replace, the Trump agenda, and stocks

There was no shortage of angst in the investment community that a Donald Trump victory in last year’s election would send shares down sharply, at least in the immediate aftermath of a Trump win.

In reality, just the opposite happened, with stocks surging in the wake of his surprise victory.

Instead, investors quickly warmed to the idea that a Republican President and a Republican Congress would quickly enact a pro-business agenda that would fuel economic growth, and by extension, corporate profit growth.

It was an ambitious agenda that included a steep cut in corporate taxes, individual tax cuts, and tax reform, regulatory reform, and new outlays for infrastructure and national defense.

Sure, Republicans have never been fond of boosting domestic spending, but tax cuts and regulatory relief have always been a staple in the conservative agenda. Even then, Trump could strike a deal with Democrats to boost much-needed spending on roads, bridges, and airports.

Of course, the Affordable Care Act, aka Obamacare, was dead, right? Republicans haven’t been shy about trying to repeal President Obama’s signature accomplishment ever since they obtained majorities in the House and Senate.

Well, proposing policy changes while still on the sidelines is one thing. Enacting those changes is another. 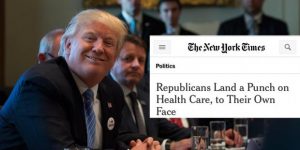 Much like a UFC fighting match, things got ugly fast, at least from the vantage point of the Republican leadership and President Trump.

Let me briefly stop here and emphasize that I am not taking a stance on Obamacare, nor am I arguing that the House Republican plan to repeal and replace was the right prescription for what ails the current system. If you want my real opinion on this then you will have to ask me in person.

Instead–and this is critical–I want to view what happened on Capitol Hill through the eyes of a non-partisan investor who is invested in a diversified portfolio, one that includes a stake in the global economy and the major sectors of the U.S. economy.

Stocks and a political brick wall

If Republicans can’t enact their agenda, won’t that quash the so-called Trump rally? Won’t shares take a beating? I’ve seen a fair number of headlines that suggest such a scenario, so let’s address it.

I believe the stock market reaction to the failed repeal and replace effort may shed some light as to how the market may react to the potential gridlock over tax reform.

The failure of the Republican health care plan has graphically highlighted the deep divisions within the Republican party. No longer do investors expect corporate and individual tax reform to sail through Congress–a stark contrast to market sentiment late last year.

While the road to tax reform may be rocky, it’s not completely blocked.

Trump and the Republicans in Congress share common goals, including a reduction in the corporate tax rate to 15%-20%, tax simplification, and a reduction in individual tax rates, the elimination of the estate tax and the Alternative Minimum Tax, and a reduced rate on the repatriation of foreign earnings of U.S. companies.

But the devil is always in the details, and how these goals may be accomplished is unclear.

One way to pay for tax cuts is by enacting a ‘border-adjustment tax.’ Without delving into the complexity of the proposal, it raises taxes on imports and subsidizes exports.

But this move is extremely controversial. It appears to be a nonstarter in the Senate, and there is powerful opposition to it from some business interests.

So, what if tax reform goes the way of repeal and replace? Will stocks take a beating? Unlike the mixed reaction to health care reform, investors have been salivating over the prospect of a cut in the corporate tax rates.

There was little fallout in the market from the failure of Republican health care, with most major indexes rising in the week following the decision to shelve the bill (WSJ).

While a cut in corporate taxes might be considered the “crown jewel” for the market, what investors want is respectable economic growth that produces respectable corporate profit growth.

Sure, political uncertainty may create noise and temporarily dampen investor sentiment, but longer term, it’s a growing economy and expectations for higher profits that support stocks.

It’s about the economic fundamentals and the long-term investment plan we recommend, which incorporates temporary setbacks. Investing is not without risks, but risks can be managed. Market timing rarely if ever works.

Conventional wisdom suggested the demise of the Republican health care plan would trip up shares. It hasn’t.

Conventional wisdom also suggests Republican gridlock and failure to enact business-friendly legislation will drive a stake through the heart of the Trump rally. While I can’t promise there won’t be some volatility, it’s a growing economy and rising profits that we are focused on.

Put another way, if it doesn’t materially impact the U.S. economy and the economic outlook, investors have historically turned their focus back to the fundamentals.

Currently, Thomson Reuters estimates that Q1 S&P 500 profits will rise a strong 10.2% (estimate as of March 31), the best year-over-year advance in over two years. And estimates for the remainder of the year are promising.

There will be winners and losers among the politicos on Capitol Hill. Some of you will join in those celebrations, while others will seek solace. Ultimately, investors who maintain a disciplined approach and avoid being whipsawed by shifting bullish/bearish sentiment stand the best chance of reaching their financial goals.

If there are any additional questions or concerns you may have, feel free to email or call me. That’s what I’m here for and I’d be happy to offer additional insights.

Surging consumer confidence and the economy

Surveys of consumer and business confidence have surged since the election, including the Conference Board’s survey and the NFIB’s survey of small business sentiment.

A stirring of the “animal spirits” is seemingly a prerequisite for economic activity. Without rising optimism, consumers and businesses are less likely to spend and boost economic growth.

At the March meeting of the Federal Reserve, central bankers raised the fed funds rate by 0.25% to a range of 0.75%-1.00%, and Fed Chief Janet Yellen took a cautiously optimistic stance on the economy.

However, in response to a question at her quarterly press conference, she noted, “I wouldn’t say at this point that I have seen hard evidence of any change in spending decisions based on expectations about the future.

“I think it’s fair to say that many of my colleagues and I note a much more optimistic frame of mind among many, many businesses in recent months. But, I’d say, most of the business people that we’ve talked to also have a wait-and-see attitude and are very hopeful that they will be able to expand investment.…I’m not seeing that at this point (increased spending), but the shift in sentiment is obvious and notable.”

In other words, the good cheer being reflected in confidence surveys, including the highest reading in almost 17 years from the Conference Board’s Consumer Confidence Index, has yet to materially translate into faster growth.

One vivid example–the widely followed GDPNow model from the Atlanta Fed suggests Q1 GDP is set to rise a scant 0.9% on an annualized basis.

That may change between the March 31 reading and the release of the GDP report at month’s end, but it’s not a ringing endorsement of economic activity.

Confidence and the political angle

The University of Michigan’s survey of consumer sentiment included this nugget in its late-March release:

“It is a rare situation that combines increasing optimism, which promotes spending, and rising uncertainty which makes consumers more cautious spenders.”

Some consumers are viewing economic prospects through the eyes of their favored political lens.

I suspect that those who identify themselves with the Republican Party won’t throw caution to the wind and ramp up spending to unsustainable levels, and I suspect those who are Democrats won’t settle into an economic bunker.

We’ll probably see something somewhere in the middle, with the hard data (spending and industrial production) meeting the soft surveys (confidence).

Notably, we are already seeing evidence that manufacturing has entered recovery mode. We have also seen continued strength in employment data, and new home starts which supports the continued increase in consumer confidence data.

For the long-term investor, it all revolves around economic activity and earnings growth. I recognize I’ve hammered this theme home before. And I suspect I’ll bring it up in future because it is that important.

Once again, let me emphasize that it is my job to assist you! If you have any questions or would like to discuss any matters, please feel free to give me a call.

The economic forecasts set forth may not develop as predicted and there can be no guarantee that strategies promoted will be successful. The opinions voiced in this material are for general information only and are not intended to provide specific advice or recommendations for any individual. To determine which investment(s) may be appropriate for you, consult your financial advisor prior to investing. All performance referenced is historical and is no guarantee of future results.

No strategy, such as diversification, can assure success or protect against loss in periods of declining values. Investing involves risk, including loss of principal

The Dow Jones Industrial Average is comprised of 30 stocks that are major factors in their industries and widely held by individuals and institutional investors. All indexes are unmanaged and an individual cannot invest directly in an index Unmanaged index returns do not reflect fees, expenses, or sales charges. Index performance is not indicative of the performance of any investment. Past performance is no guarantee of future results. The Standard & Poor’s 500 Index is a capitalization weighted index of 500 stocks designed to measure performance of the broad domestic economy through changes in the aggregate market value of 500 stocks representing all major industries. The NASDAQ Composite Index measures all NASDAQ domestic and non-U.S. based common stocks listed on The NASDAQ Stock Market. The market value, the last sale price multiplied by total shares outstanding, is calculated throughout the trading day, and is related to the total value of the Index.

Developed Markets (DM) countries excluding the United States. With 1,024 constituents, the index covers approximately 85% of the free float-adjusted market capitalization in each country.