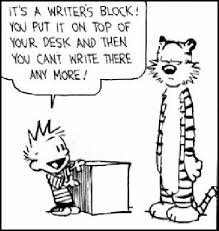 So it has been a little bit since I have put out a blog post and it feels like I am suffering from writers block.  I’m not really sure if it is writers block but it sounds good, so I’m gonna go with it.  I am sure it is not traditional writers block since I am a financial advisor that writes not a writer first and foremost.   I have heard that musicians suffer from it regularly.  John Reznik of the band Goo Goo Dolls suffered from a severe case of writers block after writing the hit song Name.   The next hit he was able to write was a little song called Iris.  He wrote it in a day and after 3 years of not being able to write anything he was able to pen this amazing spell binding ballad.  It spent 18 weeks at #1 on the charts in 1998.  It went on to be ranked the 39th Greatest Pop Song of all-time as ranked by Rolling Stone.

Why do I feel like I have writers block? Well I spend a lot of time reading and dispensing little pearls of wisdom to clients.  I am a problem solver.  The more complex the problem the more excited I get about developing a new and unique solution.  Back to the writer’s block: I have a lot of really great advice to share but the more I read the more I feel that most of what can be said on a financial topic has.  Am I over-simplifying things?  Maybe? Am I being over dramatic? Probably?

I have been reading about the challenges that all writers face and many of them talk about Perfectionism.  I have a bunch of half written ideas and I have been re-reading them and have determined that many of them are great ideas but terrible execution. That’s almost the definition of perfectionism.  The writers that were interviewed talked about how they got through it.  For many of them they took time away.  They did almost anything other than write.  I have spent most of the last 4 weeks doing anything other than writing.  I have watched a lot of basketball.  I coached my son and daughters youth basketball teams (We are a combined 12-4, not sure if that is a reflection on my coaching or their playing).  I have also spent a lot of time talking to clients.

So how do I get out of this writing funk?  I guess the short answer is to just write.  I am going to take 30-60 minutes every day and just write.  Not sure how much of it any of you will actually get to read but I am going to make a promise to myself to write because I have actually enjoyed doing it the last 6 months even if no one reads it.

Hopefully what comes from my writing binge will become my version of IRIS.

A Thought From The Factory on Main.