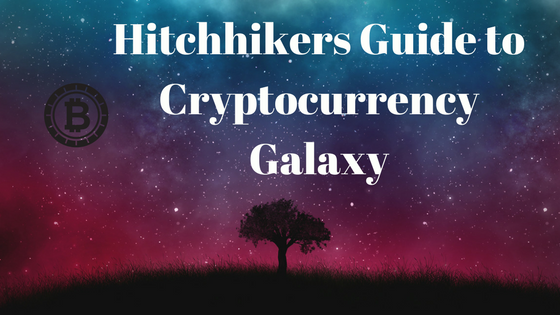 Navigating the World of Cryptocurrency:

In The Hitchhiker’s Guide to the Galaxy the characters visit the planet Magrathea which is home to the planet building industry.  Bitcoin is much like Magrathea and the Alt-coins in the cryptocurrency universe are like the planets that get built.

Altcoins are cryptocurrencies other than Bitcoin. Altcoin is a combination of two words: “alt” and “coin”; alt is short for alternative and coin as to do with currency; together they imply a category of cryptocurrency that is alternative to Bitcoin itself.

The majority of altcoins are forks of Bitcoin and are slight changes to the underlying Blockchain. Altcoins are the later alternative cryptocurrencies launched after the immense success Bitcoin had after its release in 2009. After the Bitcoin became a success, many other peer-to-peer digital currencies have emerged in an attempt to imitate it.

In General, altcoins are alternatives to bitcoin because they tend to improve and solve the Bitcoin protocol’s limitations and features. Alternative currencies aim to be better substitutes to Bitcoin, or serve different niche markets.

What are the differences in these planets (alt-coins)?

I was having a conversation with a friend the other day about Bitcoin, Ethereum, Litecoin and all of the other cryptocurrencies that exist out there.  As of last week there were over 900 different cryptocurrencies in existence.  Which makes a difficult concept (cryptocurrencies/blockchain) even more confusing for people, like my friend.

My friend is a well educated guy who has a graduate degree in engineering from a top school.  He asked me what’s the difference between all of these cryptocurrencies?  So after taking a deep breath and thinking for a minute I came up with this explanation.  After I explained the basics of what a cryptocurrency is and how blockchain works I began to tackle the differences between the most popular cryptocurrencies: Bitcoin, Litecoin, and Ethereum.

Bitcoin is the original cryptocurrency.  It is gaining acceptance as a way to transact business with many online and some offline retailers.  If I was to find a comparison that people can easily relate it to is Gold.  Now I am not saying Bitcoin is exactly like gold but it makes for a good analogy.  There is no intrinsic value for gold, just like Bitcoin.  The value for both is determined by the markets and fluctuate based on the market forces.  They are both mined, one by large equipment and one by computers.  You can convert the hard form of gold into cash based on the spot price just like you can convert a Bitcoin into cash in your bank account.  One of the challenges for Bitcoin is the speed of processing transactions and scalability, which may limit its uses not unlike gold which has limited uses. For the hitchhikers guide Bitcoin is Magrathea.

Litecoin is one of the first cryptocurrencies to be considered a Bitcoin clone, also known as alternative coins or alt-coins.  It has a slightly different algorithm and it allows for faster transaction processing than Bitcoin.  If I were searching for a commodity comparison it would be Silver.  Silver is used as a part of coins and can be used for financial transactions quicker and easier than gold can just like Litecoin is faster for transactions than Bitcoin.  I know this is a little bit of a stretch but I am using it to illustrate how the different cryptocurrencies function. Silver may have a broader use case than gold as well since it is the most electrically conductive metal.  The planetary comparison is Brantisvogan, where most of the galaxies bank accounts are held.

Ethereum has certainly been getting a ton of publicity since the beginning of the 2017 having risen from $8 at the beginning of the year to over $260 as of the date of this post.  So when I was searching for a comparison the only think I could come up with was oil.  Oil as a commodity helps fuel much of what gets done in the world just like their blockchain for Ethereum drives much of what is happening in the world of decentralized applications.  Ethereum would be Megabrantis Cluster in galaxy terms.  It is a powerful backbone technology that many of the future uses for Blockchain will be built.

So what does it all really mean?  Fundamentally the underlying Blockchain technologies for each of the cryptocurrencies operate under different rules which makes them candidates for different types of uses.  Just like there are 1000s of planets across the Hitchhikers galaxy each has a slightly different makeup form and purpose.  Some of the planets (or alt-coins) belong on the outer-fringes of the outer rim because they are not good for supporting life and others like Magrathea (Bitcoin) significant role in the galaxy.

When I think of the word token I think of a little plastic chip that you get at a casino that I can exchange for a drink or in Hitchhiker parlance they are Altair.  In the beginning of the digital world a token is a string of characters that help identify you when you enter your email in a website or online login.  Now in the world of cryptocurrency the token can not be a string of characters because they could be easily copied.  Instead they exist as entries on the blockchain ledger.  The tokens establish your ownership and you have a unique key for the tokens you own.  There are two types of tokens in the crypto world, intrinsic tokens and asset backed tokens.

Asset backed tokens are the digital equivalent of the IOU that was created back in the 17th century when people would park their gold with a goldsmith.  These notes could be transferred from person to person, and anyone holding those notes could go back to the goldsmith and claim the actual gold. Asset-backed tokens are the digital equivalent. They are claims on an underlying asset (like the gold), that you need to claim from a specific issuer (the goldsmith). The transactions as tokens get passed between people  are recorded on the blockchains, and to claim the underlying asset, you send your token to the issuer, and the issuer sends you the underlying asset.  This is the main type of token that is purchased if you are using a system like Coinbase where you send cash from your bank account and get a token in exchange.  You will have to go back to Coinbase to exchange that token to get the cash back into your bank account.

What is an ICO?

Initial coin offering (ICO) is an unregulated means of crowdfunding via cryptocurrency. The term is often confused with ‘token sale’ or crowdsale, which refers to a method of selling participation in an economy, giving investors access to the features of a particular project starting at a later date. ICOs, on the other hand, sell a right of ownership or royalties to a blockchain project.  The coins that are issued in an ICO is an ownership interest that in many cases includes voting rights in the private company similarly to owning a share of stock in a public corporation.  I am not saying that the risks are the same in owning a share of stock or a coin issued in an ICO, just that structurally there are similarities.

The first token sale was held by Mastercoin in July 2013. Ethereum raised money with a token sale in 2014.  As of May 2017, there were approximately 20 token sales happening every month.  This is a significant amount of capital being raised by private companies in a fairly unregulated way.

In July 2017 the U.S. Securities and Exchange Commission (SEC) indicated that it could have the authority to apply federal securities law to ICOs. The SEC did not state that all blockchain tokens (ICOs) would necessarily be considered securities, but that determination would be made on a case-by-case basis. The SEC stepping in to potentially regulate ICOs may lead to more mainstream investors to participate in the ICO market.

The cryptocurrency market and ICOs  are very complex and should not be something that investors jump into without a full understanding of what the risks are.  Despite the headlines of Bitcoin going up 260% for the year there are still significant risks and challenges that have to be acknowledged before anyone invests their money into any of the cryptocurrencies. But pack your bags folks we are only beginning to explore the new universe of cryptocurrency.

The opinions expressed in this commentary are those of the author and may not necessarily reflect those held by Kestra Investment Services, LLC or Kestra Advisory Services, LLC. This is for general information only and is not intended to provide specific investment advice or recommendations for any individual. It is suggested that you consult your financial professional, attorney, or tax advisor with regard to your individual situation. Comments concerning past performance of any security mentioned are not intended to be forward looking and should not be viewed as an indication of future results.