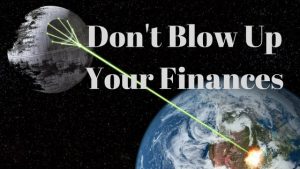 I am very excited for the new Star Wars movie Rogue One! I am so excited that I will be one of the fools who see it at midnight on the night it opens.

Rogue One, for those of you that live under a rock or are not Star Wars fans (GASP!), is about the group of rebels that steal the plans for the Death Star that the Empire is building.

The Death Star is a moon sized interstellar war base. It was technologically far superior to anything in existence up until that point.

I have thought about this more than a few times but could you imagine how much it would cost to build something that big?

Well apparently, I am not the only one. A group of finance students at Lehigh University (Centives blog 2012) determined that it would cost a lot! How much exactly well I will share their methodology because it is so well thought out.

“We began by looking at how big the Death Star is. The first one is reported to be 140km in diameter and it sure looks like it’s made of steel. But how much steel? We decided to model the Death Star as having a similar density in steel as a modern warship. After all, they’re both essentially floating weapons platforms so that seems reasonable.

Which seems like a colossal mass but we’ve calculated from the iron in the earth you could make just over 2 million Death Stars.

But before you go off to start building your apocalyptic weapon, do bear in mind two things. First, the 2 million death stars is mostly from the Earth’s core which we would rather you didn’t remove. Secondly at today’s rate of steel production (1.3 billion tons annually) it would take 833,315 years to produce enough steel to begin work. So once someone notices what you’re up to you have to fend them off for 800 millennia before you have a chance to fight back.

For those wondering at home that number is 852 Quadrillion. That’s what 15 zeroes will get you. A study done by Zach Feinstein, a professor at Washington University, estimates that the total cost for the Death Star 1 to be 193 Quintillion.* This number includes all of the research and development as well as the technology, materials, construction and labor costs.

Ok so before every Star Wars fans heads explode I know it is a movie and I understand the concept of the galactic economy being significantly larger than our current economy. Thus making the Death Star a relatively reasonable expense for the Galactic Empire.

So how does this relate to your personal finances?

We all get enamored by fancy things. Its human nature. Heck even Darth Vader warns against it when discussing the first Death Star in a New Hope. “Don’t be too proud of this technological terror you’ve constructed. The ability to destroy a planet is insignificant next to the power of the Force” – Lucas (1977).

Whether it be looking at new cars, or a new house or even upgrading a kitchen or other home project we all can get too far out in front of ourselves. For the Empire it proved devastating they left a ventilation shaft open that caused their entire investment all $193 Quintillion to be obliterated into tiny bits of space dust.

What are you looking at purchasing?

We recently purchased a new to us car. We were in the market because an accident totaled our van, but I will leave that for another discussion. We spent about a month looking. Should we buy a new car or a used car?

Will it blow up your budget?

We ultimately decided on a used car and paid cash for most of it. We could have financed all of it but I wanted as little a car payment as possible. I hate car payments. They are a bain to budgets everywhere and tend to cause more trouble than they are worth. That said I didn’t want our new purchase to blow up our budget and our other long term plans.

Don’t let your Death Star decisions blow up your budget.

Would you like help with your budgeting? Call me to schedule a 30 minute consultation.

Until then May The Force Be With You!