Before I begin this piece let me preface it by saying I don’t know if Bitcoin or any of the cryptocurrencies will be around forever. I do believe that the technology backing these crypto assets will be a game changer but it will take a long time for that to occur. In the interim we are left with this mania that has gotten a little out of control.

I probably receive 50 emails and solicitations daily for Initial Coin Offerings (ICOs). It’s ridiculous and out of control. I feel like it is a reincarnation of the “pump and dump” penny stock shops that popped up all over Long Island in the early 90s (Think Wolf of Wall Street). Because of that if you “invest” in an ICO you assume the risk and should assume that you will probably lose all of the money you invested.

Back to the price movements. Bitcoin was up well over 1500% in 2017 and even with a significant pullback over the last two weeks is still up big over the last 3 months. The other cryptocurrencies like Litecoin (up 5500%), Ethereum (up 7300%), Ripple and Neo all saw their values soar in 2017. This price action up was driven by many factors including a significant increase in interest in cryptocurrencies, FOMO (Fear of Missing Out), significant capital inflows from institutional investors, increased acceptance across the globe, and of course greed. 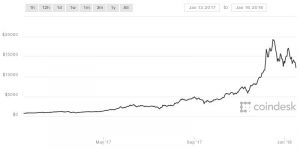 So when I woke up this morning (1/16/2018) and see headlines like Bitcoin crashing because it is down 20% overnight my response is so what. This sort of crazy price movement is not new and things that soar to the moon as quickly as cryptoassets did in 2017 usually take a pause and come back down before either going back up or going away. 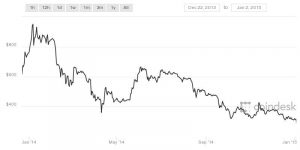 Does that mean that the bottom is set here around $12,000 and Bitcoin is gonna take off again? Who knows.   Am I surprised that Bitcoin has fallen from its highs of $20,000 (Dec. 2017) only a month ago to $12,000 today (1/16/2018)? Absolutely not. Would I be surprised if Bitcoin went to $100,000 this year? Yeah Shocked if I am being honest. What I am surprised by is that so many people are rushing out to sell or pass judgment because its price is down. The Mark Twain quote says it best: “History doesn’t repeat but it often rhymes.” People were buying like crazy into the run up at the end of last year and now that it’s going down many of them are selling. 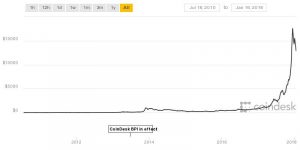 Cryptocurrencies are not for the faint of heart. They are highly risky and extremely volatile. My recommendation is still the same when it comes to Cryptocurrencies. Invest in stuff you understand and don’t invest in something if you can’t afford to potentially lose that investment.